The Planet is the School For the Colombian writer William Ospina, it is urgent that the educational processes embrace a deep sense of dignity and community, and not only reduced its goal to success and individual profitability. For this to happen, says Ospina, education must give a special place to thought, creativity, communication, socialization and happiness.

This year at Fundación Karisma, thanks to the Social Justice Repair Kit project, led by the Inclusive Design Research Center at OCAD University (Canada), we had the opportunity to approach two groups of young people who are living different learning processes: one of them is a group of young women of the “Motivando a la Gyal Festival” in the Aburrá Valley (Antioquia) and another group are highschool students of the Real Campestre School in Fresno (Tolima).

Bearing in mind the words of Ospina, we have been working on the project The planet is the school, in which we designed a series of activities that served to open those roads forgotten by the educational traditional model and allow us to work on the relationship between young people, territory and technology, through two main strategies: Fresno is located in the north of Tolima, in a mountainous region characterized by the division of the territory into small farms with various crops such as coffee, typical of the region, avocado, soursop, banana, cane are grown on the same hectare, among others.

In Fresno, the Real Campestre School opened the doors of two of its venues, located in the towns of Las Marías (one hour from Fresno) and Mireya (10 minutes from Fresno). In order to work with the students, it has been fundamental to count on the commitment of the professors Giovanna Ramírez and Irene Rodríguez.

To develop the project we also have the collaboration of the Fresno Posible Foundation, especially its director Camila Barco and Victoria Pérez, who has been the local coordinator of the project.

In the case of Fresno, we ask to the students if they want to participate in a project derived from The planet is the school that we call “Opportunities for young coffee growers”. The goal of this project is to accompany them at this specific time of their lives, where questions about the future (their future in the countryside or the possibilities of going to the cities) begin to intensify.

In the development of the project we mix creativity with the possibilities of local entrepreneurship and digital tools, in order to amplify those questions and find possible ways to solve them in collaborative dynamics with a high sense of the local.

Thus, they visited local stores and farmas related to agriculture, mechanics, beauty and ecotourism (topics for which they had expressed interest) and then, they transformed the memories of those visits into drawings, photographs and texts, created in workshops with artists.

An important part of the Fresno project is the use of the Kimera Local Network, since access to the Internet is very limited (in one of the school’s venues there is no connectivity) and this tool allows students and the teachers can share content.

Why an offline local network?

According to the results of the Synthetic Index of Educational Quality (ISCE), published on May 16, 2018 “only 37% of schools have drinking water, while in the city 100% of schools are guaranteed this service. Something similar It happens with  internet access. In cities, 91 of every 100 schools have wifi or broadband, but in the countryside only 53 out of 100 can enjoy this privilege” (Published in “Colombia 2020”)

Internet is not a privilege. Nowadays it is a tool that guarantees the exercise of fundamental rights such as access to education, information, culture, freedom of expression, among others, the rural context presents urgent needs that do not give wait to the will of the government and private companies. As a civil society, we find an alternative tool in the local network, which, although it does not solve the problem of connectivity, facilitates the exchange of information, using a very low-cost infrastructure that is compatible with the computers and operating systems that are available in rural education institutions. That is why the local network has been a fundamental element.

Taking advantage of the knowledge acquired, the questions and answers that have emerged throughout the process, may address the question “what we want and can do here.”

To learn more about the progress of the project in Fresno, you can access to http://fresnodigital.info/. (In Spanish) Design by Motivando a la Gyal

In the case of Motivating the Gyal, the proposal was totally different. This group already had a project to develop and “The Planet is the School” is today one of its allies.

“Motivating the Gyal” is a citizen platform that brings together independent projects of people who identify with the feminine. It was created in 2017 by a group of young women from the Aburrá Valley who are interested in topics such as collaborative technologies, feminism, sow, social cartography, among others. Last year they held the first festival with the same name and prepare the second version for September 2018.

In her words, the festival aims to generate: “exchanges of experiences, knowledge, affection, products, talks, workshops and discussions (to) create a space where thinkers, activists, children, mothers and artists from different contexts, we research , we build effective processes and networks (a) in different ways, that contribute in the remaking of our relations with the world, from bodies and diversity ”

During the production process of the Festival, the participants have been building a sound memory archive of their tasks, their interests and the environment from which they participate in the creation of the Festival. That sound memory, which are audio messages sent to me through whatsapp, will be a valuable file to know what this group of women thought that in 2018 decided to share and expand their knowledge about sovereignty, technology and gender, in an urban context, as complex and diverse, like Medellin is.

The next task is to imagine how to share that memory with other people.
To know more about the Festival you can follow them in Instagram @motivandoalagyal

The week of May 24 to 26, both groups met in the city of Medellín to create new collaborative networks and have the opportunity to exchange experiences, stories and challenges from different perspectives in front of common questions such as what we learn, how we learn, how we can share knowledge, and about ideas related to the future, work, territory and collaboration. The meeting that took place in Platohedro, a creative and collaborative cultural center based in Medellin, was also joined by Dana Ayotte (designer) and Michelle D’Souza (developer) of the Inclusive Design Research Center at OCAD University (Canada), as well as the researcher Silvia Baldiris of Cuéntalo project from Fundación Universitaria Tecnológico Comfenalco (Cartagena) and by Karisma participated Diego Mora Bello (Communications Coordinator) and María Juliana Soto, who has coordinated the project in general.

In the framework of the meeting, Dana Ayotte and Michelle D’Souza presented the application “Storytelling tool” that they have developed thinking about projects like The planet is the school, that hosts diverse initiatives regarding participants, goals and technological context. This tool seeks to facilitate the exchange of stories using different narrative languages, and will surely be very useful for the Motivando a la Gyal Festival and for the next stage of “Opportunities for young coffee growers”.

In summary, if “The Planet is the school” our task is to learn, innovate and narrate the territory. Or at least we’re trying.

2020 was a challenging year on many levels. The COVID-19 pandemic changed all aspects of our life, heavily impacting every issue and topic covered by the Karisma Foundation. This situation also changed the way we operate and work. Without a doubt, the pandemic highlighted, exacerbated, and made our substantive concerns more visible. 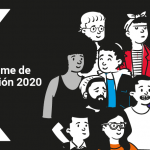